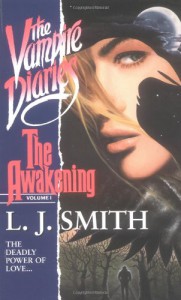 Title: The Awakening [The Vampire Diaries 1]

Elena: beautiful and popular, the girl who can have any guy she wants.

Stefan: brooding and mysterious, desperately trying to resist his desire for Elena . . . for her own good.

Damon: sexy, dangerous, and driven by an urge for revenge against Stefan, the brother who betrayed him.

Elena finds herself drawn to both brothers . . .

who will she choose?

So, before we get down to the nitty-gritty, let's talk about the cover. There's actually several covers for this book, but take it from me, most of them are very dated. I had no idea how old these book was until I saw the original cover. Wow. Time warp back to my childhood! The one I've picked to show here is the prettiest, but also the most inaccurate. Why? Because Elena, the main female lead, is blonde. Woops! It also has that annoying CW brand marketing across the top, but I won't hold it against them. They want people to watch the show, and they should... because it's so much better than the book.

I'm one of those people that 9 times out of 10 will tell you that reading the book is better than watching the movie/show. It's one of those things that Hollywood has ingrained in my head for years. The books are cannon--nay, gospel--and I tend to view the movie/show attached to them as annoying attempts to remake something that didn't need to be remade. Details are always changed, and it feels like sacrilege. It makes me angry.  Now, in a strange twist of things, if the movie/show comes first and the book second, my opinion usually falls more along the line of "Yay! More content!" It doesn't bother me that the book is different than the movie, because it's just more of the thing I already loved. I'm not sure why there's a double standard, but that's how it is. Unfortunately, in this case all that gets thrown out the window.

The show is better than the book. Hands down.

The book centers around Elena Gilbert, a popular, blonde-haired, blue-eyed high-school student that always gets her way. (Gag) Her parents have just died in a car accident 3 months prior to the story's start, and she's not particularly looking forward to the new year. Her endearing, boy-next-door boyfriend gives her feelings of "meh" in general, but he's the cute jock, and she's the pretty cheerleader, and they've been friends forever. The perfect couple, right? Introduce Elena's shallow and ditzy friends, stir in a hot new boy, and suddenly Elena's dumping her boyfriend and scheming up ways to get in good with the new kid, manipulating her friends and the student body in order to finagle herself onto his radar.

Go ahead. Soak that in.

What Elena doesn't know yet is that the new hot boy, Stefan Salvatore, is a vampire, and Elena is a dead-ringer for his ex-girlfriend. Throw in a few deaths, Stefan's hotter older brother (Damon), who just wants to make Stefan's life a nightmare in any way possible, and you have... well... a really shallow plot.

The writing was good.  The grammar was clean, the style was engaging and clear. From a technical standpoint, there wasn't anything wrong with the story. I did manage to read it all the way to the end (though that may have to do more with loving the show than enjoying the book). The problem, for the most part, was the characters. They weren't likeable. Elena was manipulative, shallow,and selfish. Bonnie was a ditz. Matt was cute in a lost puppy sort of way, but mostly just let Elena walk all over him.  Tyler was a rapist. Caroline seemed to only be present to be snotty and jealous of Elena... though the reasoning was never really explained. I can barely be bothered to even remember who Meredith was. Damon was evil for the sake of needing someone for the rest of the characters to hate. Stefan... Stefan was surprisingly juvenile given his age, and a little bit of a lost puppy when it came to Elena.Tanner (the teacher) hated all his students for no particular reason. He just wanted to be an ass.

Overall, I honestly didn't like any of the characters, and spent most of the book with this feeling that nothing was actually happening. There didn't seem to be a real motive behind anyone's actions except for the immediate "I want this. Now. Right now. Why? Because I do."  This kind of barely-there plot works with the TV show because it's serialized. The first episode introduces the world (which equated to this book by the way) but no major plot issues came up... those were saved for later in the season. This book worked the same way. It was an introduction to the characters and the world... but nothing really happened. Unfortunately, the characters just couldn't hold it up on their own.

The romance was laughable. Honestly. Elena wasn't particularly drawn to Stefan, she spotted a hot guy and said "dibs!" She wanted him because he was the hot new guy, not because there was sexual chemistry or his personality was endearing. Stefan was intrigued by Elena, mostly because she looked like his ex-girlfriend. I didn't feel the chemistry. They were your basic teen couple that "fell in love" based on the premise that they could. It was maddening to see how flimsy the whole thing was. In fact, the most interesting part of the story was when people started getting murdered. Thank god for the irrelevant deaths of teens and a teacher, or I would have closed the book.

Overall, did I like the book? Surprisingly, no. I say surprisingly because I AM an avid watcher of the show. I've seen every episode of the past four seasons. I honestly thought I'd love the books. Instead, I finally understand why the show is so different from the novels. It had to change--that was the only way they could make it into half-way decent entertainment. I don't recommend the book. Seriously. Go watch the show instead. It may be your typical YA Paranormal Romance full of vampires and angsty love, but at least there's a plot.